On Sunday evening, I made a plan of what I was going to do on Monday; it involved getting up early and really utilising all the hours in the day. Since leaving my job, my body clock has been messed up and I ended up waking up as most people would be contemplating an early lunch. Not wanting to waste anymore of the day, I quickly got ready and tried to follow the plan as best as I could with the lost hours.

My first stop was Stockport. I've only actually been to Stockport once before - I've only ever travelled through it on the way to London - but it has a decent range of shops, both charity and other retailers. My first purchase was this burnt orange knit. It was on the vintage section in Cancer Research and I paid £4 for it. It's one of those items which obviously isn't truly vintage, more vintage-style. It's actually a ladies size large but the colour of it really attracted me and I think it could work worn as a dress with thick, black tights and boots for the winter. 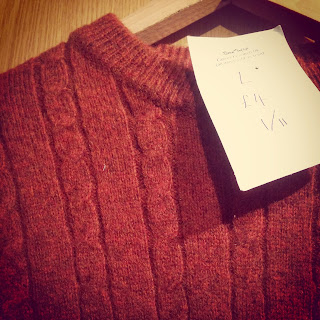 My next purchase was this small piggy bank for £1.50 from St Ann's Hospice. I've briefly touched on my pig collection previously - basically, it's becoming out of control! I'm trying to cut down on my pig expenditure but I just couldn't resist this one's face - he looks so sad. He's one of the old style banks which doesn't have a stopper in the bottom -people would just smash them when they were full. The thought of someone taking him home and potentially smashing him, made me shudder so I had to save him. He was also on the 'vintage' section which is quite small but well presented, in one of the upstairs rooms of the shop. 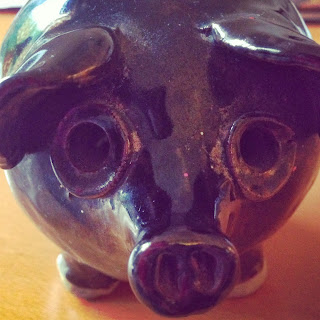 Next, I went to Cheadle, which is about a 20 minute bus ride from Stockport. It's actually quite a well-known place in charity circles as the area is quite affluent and some of the actresses from Coronation Street have been known to shop there, though this is only rumour, I've never seen any myself! The first shop I went in was another St. Ann's Hospice which also had a vintage section. Now this shop is really special. I'm hoping to do a complete blog post on it with the backing of the charity so I won't spoil that but if you're in the area, it's worth a look.

The next shop down is Barnardo's. There's two very different Barnado's shops on the same road; one is completely vintage and one is a £1.99 shop. Yes, EVERYTHING is £1.99. The first thing I saw was a cream-coloured jumper with visible zip-back detailing. I'm going through somewhat of a jumper obsession at the moment and this was the perfect new addition as I have nothing in this colour. 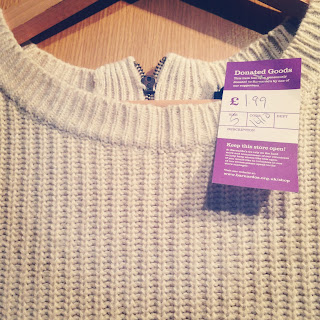 I also purchased these black boots with gold detailing and block heel. They're from River Island and they're absolutely immaculate. And they were £1.99. At that price, they really were the purchase of the day. They're a little more round-of-toe than I would usually like but they're super comfortable and again, perfect for winter - maybe even with my new orange jumper-dress. 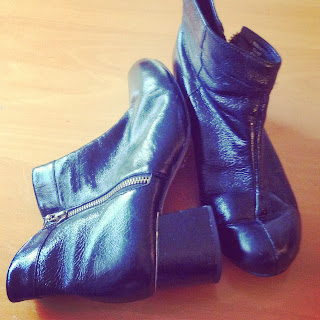 And that was it. Not the busiest day purchase-wise but I really genuinely love everything I bought and I still had change from a £10 note!

Posted by Charlotte Adams at 05:42