So here I am again apologising for the lack of blog posts of late...November has been chaotic!

At the beginning of the month, there were a few difficulties at work and some big changes in my personal life running alongside. A couple of weeks were a complete write-off emotionally and I had to take some time off work mid-month. However, luckily for the blog, I feel as if I've spent the last two weeks shopping constantly! I even left my Manchester comfort zone to return to my old haunt of Liverpool and spend an afternoon exploring the charity shops of Allerton Road for the first time in five and a half years! I also spent some time shopping with my charity shop inspiration and original second hand shopper motivation - my mum! Preston city centre was really disappointing but she took me to some of her out-of-town favourites and we both managed to get some bargains. Alongside this, I've been exploring all the usual suspects across Manchester. The result of all this is a never-ending stream of washing and photographing to be done (and a pretty dented bank balance!).

I think the most manageable way to explore all my new bargains is to list them about five at a time and I'm going to start with today!
I had an appointment at the doctor first thing this morning and due to severe laziness, I haven't changed doctor from when I moved house a year ago so I needed to get the bus up to the practice. This gave itself nicely to getting a dayrider and completing an abbreviated version of the charity shop run!

The only place I really wanted to go was Withington - somewhere I haven't been in ages. For everyone who doesn't live in Manchester, Withington is a small place just down from the student hub Fallowfield and half way to Didsbury. There are a fair few charity shops - big chains like Cancer Research and Oxfam sit alongside local charities like Barnabus Manchester. After a quick lunch in Fuel Cafe and a lunchtime drink (it's obviously payday!), I set off exploring. I had a message on Instagram about two weeks ago kindly letting me know the Lighthouse charity shop had a whole load of Missguided stock which had just come in but I hadn't managed to take a look until today. I wasn't expecting there to be anything left but the shop was full of it! I overheard the lady saying to two girls that she handpicks from a warehouse of it (where is this wonderful place?!) and gets fairly regular deliveries. There were about ten different items I could've happily taken home but I had to hold myself back, given I need money for Christmas and all!

I'm in love with this gorgeous electric blue coat (so much brighter when not in front of the camera) which cost £9.99. I know what you're all thinking - a £10 spend on one item from a girl who crams items into a £2.50 'fill-a-bag' bag like there's no tomorrow?! I think there are some things which are worth a bit more and a coat is one. It's pretty miserable in Manchester most days now and I get pretty unhappy when I'm cold. It's also new. And it's payday. 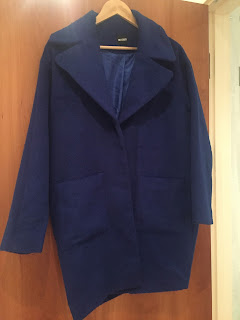 I also picked up these crazy white shoes. Like the studded, leopard print boots from a few months ago, I can't decide whether these are incredible or super ugly! I do know I shouldn't wear them anywhere which is potentially muddy...they were £4.99 - again, more than I'd normally pay but they're immaculate. 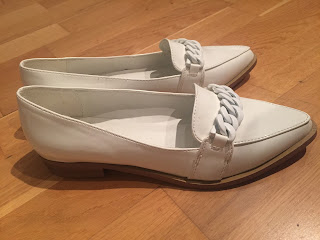 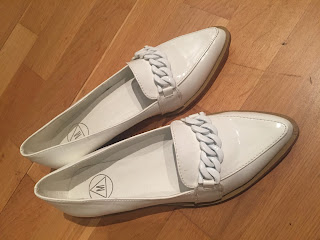 Earlier in the day, I stopped off in Hyde. Usually a charity shop gold favourite, I was a little disappointed and only managed to pick up these Zara mustard coloured skinny trousers for £3 in Cancer Research. 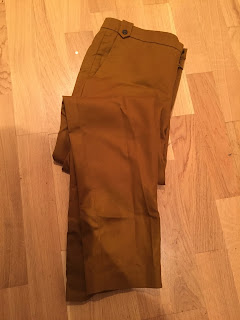 These next two items I picked up on Saturday after finishing work in Sale. 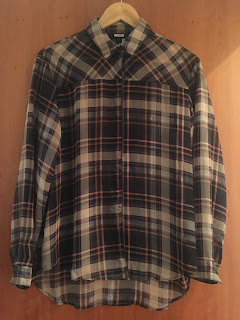 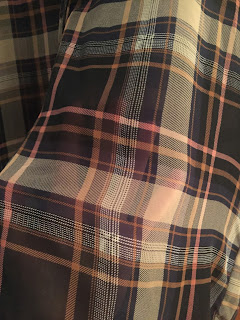 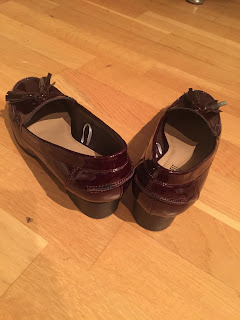 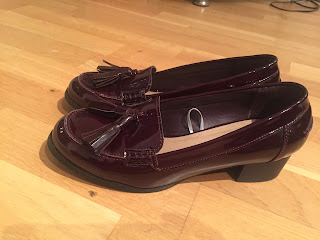 How has your November been for bargains? Hopefully I can post a bit more regularly now things are back on a more even keel - I know I've got a lot of catching up to do! There's just not enough days in the week to wear all my new things! I can think of worse positions to be in :)

Posted by Charlotte Adams at 12:08